Aligning text under headings and subheadings

Instead of first-line indents, I prefer using space above and below. But I’m having trouble visualizing how the text underneath headings should align. 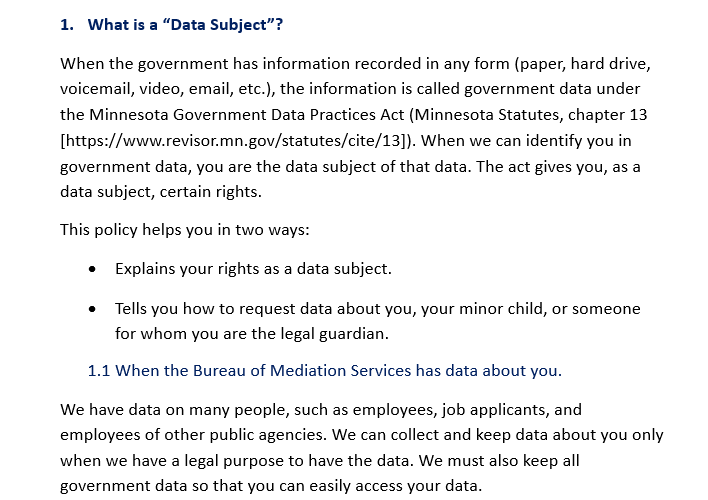 If I use a tiered numbering system, how should the text underneath the headings and subheadings align?

If I use bullets or numbers for a list underneath text, should the bullets be indented or in line with the text above?

Either way is fine. Though I prefer aligning bullets to the left edge of the preceding paragraph, because I think it looks tidier, and conserves the rightward drift of the left margin. Legal writers in particular get into trouble with excessive indenting.

The rightward-drift-of-the-left-margin struggle is real. I arm-wrestled a similar problem–list of bullet points followed by a new subheading–in someone else’s document that they left for me to put to bed while they were on summer vacation. I will have to revisit whether the excessive-indenting habit contributed to the problem. Do you have a 12-step program you could suggest to help me break that habit?

Helpful thread…I’ve struggled with this.

Bullets are something I struggle with, as well. It seems to me that a first-level bullet character should be indented in the same way that a block quote is, especially if the list is meant to be part of the paragraph. But I get that this scheme makes the text itself twice-indented.

I agree with @mbutterick; there may be instances where aligning under the numbered heading is not optimal, and the second example given can sometimes be preferred in rare instances, but those uses are rare.

As with most details of design, if I see the first example, the only pause it gives me is to reflect: “ah…well done”, whilst the second almost always has me asking why that choice was made, and usually deciding it was the wrong one.